History of the village

History of the village

The village of Jahodná lies near the north-east boundary of the Dunajská Streda district, less than 10 km from the district town. Most of the village lies on the left bank of the Little Danube, but since there is also one row of houses on the right bank, we could say that the river runs through it. The village’s territory incorporates several small homesteads.
There is only a little reliable information on the origins of the village’s name. It is said that around 1460, King Matthias’ soldiers were hunting in the neighbouring woods and, as they were resting in a clearing, some girls from the nearby settlement offered them freshly picked strawberries. Perhaps it was these soldiers who unwittingly gave this settlement, where many strawberries grew, the name of Eperjes (Eper = strawberry).

The settlement was originally located on the right bank of the Little Danube. The first written mention of the village dates back to 1552. An inventory list of homesteads dating from 1553 states that at the time András Báthory and some nobles of Červený Kameň held 5 homesteads each in the village. The document goes on to say that there were 10 inhabited plots of land, 6 uninhabited and 3 serf plots of land in the area. At the beginning of the 17th century, the village was the property of Mihály Thurzó’s widow; in 1640, it was transferred to the Esterházys. It was probably at this time that the village began to expand on the left bank, because the estate’s manor was in a neighbouring area, in Tomášikovo.

In 1747, the Esterházy family had a Roman-Catholic church built in the village in a Baroque style. The church, which is the oldest public building in the municipality, received the name of Saint Peter and Saint Paul, the apostles, because of the day on which it was consecrated in 1750. In 1877, the village was shaken by a huge fire. It not only destroyed the church’s roof, but also its tower and organ, and damaged the bells. The church was rebuilt to its present for in 1882, and is now an embellishment to the area. In May 1825, a one-form Roman-Catholic School was opened in the village. However, the population grew and so the school had to be enlraged. In 1896, Count Mihály Esterházy sold to the village an old building opposite the church, which had previously been a a pub and a butcher’s shop under the privilege of the estate-holder. The building was converted into a two-form school and two flats for teachers, and it was used for teaching from 1900 to 1961, when a new nine-form school was built. Afterwards, a part of the building served as the school canteen; now it is home to a health centre, and there used to be a post office in the other wing.

An important source of food and income for the village population was fishing. The privileges of fishing on the Little Danube section between Jelka and Kolárovo belonged to the Esterházy family; local fishermen paid them rent for fishing. For centuries, transport across the Little Danube was provided by a ferry. For a long time it was the property of the Esterházys, until it was bought by the local land-holders’ group in 1792. The ferry operated until 1940, when a bridge was built across the river. However, on the 31st of March in 1945 the threating German army destroyed it and up to 1992, when the new bridge was finished, transport across the river was provided by temporary solutions. The village used to be known primarily for its mills. Unfortunately, out of the eleven mills wich milled corn from the whole surrounding region, only two have been preserved. However, the last local miller, Béla Takács sold his mill in 1972 to the Slovak National Museum in Martin, so afterwards only one mill has been preserved in the village as a technical landmark. It was built by Boldizsár Renczés at the end of the 19th century, but when the mill burnt down in 1920, it was bought by the lord’s forester, István Nagy. He had it transformed it into a water-driven saw mill in 1931. Using various pieces of equipment, he produced electrical energy in the mill, which not only significantly increased the sawing speed, but also allowed public buildings in the village to use electricity. After his death, the mill was assigned under the administration of the Žitný Ostrov Museum.

Jahodná offers ample opportunities for leisure-time activities and water sports, thanks to which it has been sought-after by increasing numbers of visitors since the end of the 1950s. The Little Danube area is a paradise for the lovers of water sports, as well as for fishermen and swimmers. The part of the Little Danube extending downstream from the water mills, where a settlement of chalets was built in the 1970s, is also very popular. The village has a beautiful park with precious trees, a sports ground, a pier and a boat rental facility. Every year, Jahodná hosts the ”Katica” puppet festival. The puppet club, the mixed choir, the modern dance group and other interesting clubs help restore the village’s cultural life; the volunteer fire brigade re-instated the tradition of Carnival celebrations. Traditionally, group boat trips take place every year, for example on Easter Sunday or on the 1st of May. Usually, on the last Sunday in January the well-known group of though swimmers, the ”Polar Bears” visit the village. Since 1997, the last Saturday in May or the first Sunday in June has been set aside for for the ”Village Fest”. Visitors can expect delicious food, drink, music for dancing and, most of all, real fun. The climax of the rich all-day programme is a performance by a well-known artist or group, usually from Hungary. 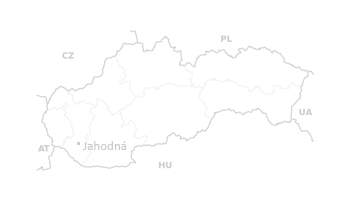